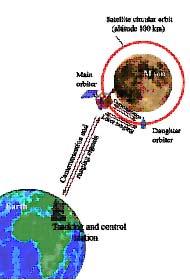 The scientific objective of the student project LUNGRA (LUNar GRAvity) is the precise mapping of the lunar gravity field, based on satellite-to-satellite tracking. In view of the renewed interest in lunar missions there is a great interest in mapping the lunar gravity field and understanding its mass anomalies. The concept of a two satellite formation is used in the LUNGRA student project. The daughter satellite LENS (Lunar Experimental Nano Satellite) will be externally attached to the mother spacecraft, and released upon arrival at the moon. The LENS satellite will be placed in the same lunar circular polar orbit with altitude 100km, as the mother spacecraft, at a distance of 50 km. The measurements performed on-board the lunar orbit include the relative range-rate between the satellites, acquired by laser. The interface unit CLI with laser transmitter and optical receiver assembly, mounted on gimbals, is fixed on the mother spacecraft. The LENS satellite is equipped with a laser retroreflector, for the relative range-rate measurement. The LENS main operational subsystems (power, attitude control system, propulsion, telemetry, command and communication, on-board data handling) were conceived and developed during the project.

An attitude control system based on 3-axis stabilization was chosen. Preliminary architecture of the LENS, satellite detailed design, structure strength analyses were implemented. The estimated mass is less than 10 kg, with dimensions of 300x250x200 mm (Height x Width x Depth). The average power is about 6 Watts. Launch opportunities and maneuver control in orbit were also considered. Preliminary CLI design was carried out. The measurement technique, based on a laser transmitter/receiver mounted on the CLI, together with a retroreflector mounted on the LENS, is described. Manufacturing issues, product safety and cost analysis were briefly examined. The design demonstrates that a lunar experiment to obtain precise gravity potential could be realized on the basis of a nanosatellite and laser ranging technique.

The educational goal of the LUNGRA student project was to demonstrate the capability to develop a very low mass, low power, low volume, and low cost nanosatellite, while fulfilling an important and ambitious scientific mission.