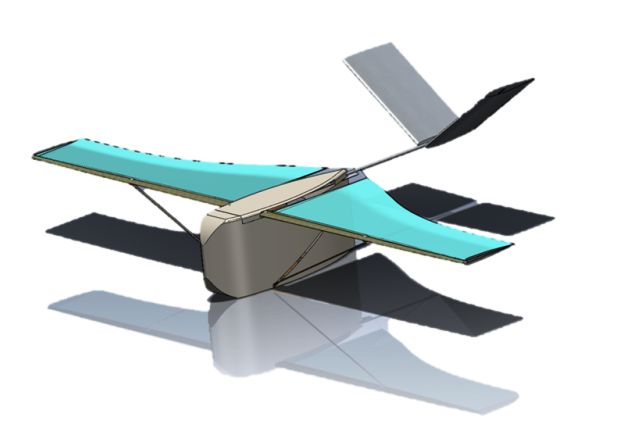 The Ghost Glider is a UAV designed to deliver a supply crate of up to 1 ton over a gliding distance of 75[km] and a drop altitude of 7[km].

4  UAVs can be loaded onto one C-130 aircraft, thanks to sailwing technology implemented in the design, which allows for a low profile folded configuration .

A Monte Carlo simulation produced an average survivability of 93% against light enemy fire.

Once on the ground, the payload can be quickly extracted from the aerodynamic system by use of pip-pin mechanisms.

The sailwing geometry was designed so that performance data could be based upon extensive wind tunnel experiments for this wing type done by Fairchild.

The wing is comprised of a leading edge beam with stiff profiles at the root and tip, covered with 2 layers of fabric stretched by a steel cable forming the trailing edge. The L.E. is a 5mm thick, variable elliptic cross-section Carbon Fiber beam .This beam was designed to withstand the loads generated while restricting wing deflections to an acceptable range.

The tail is operated by a 30 N*m servo using a tail horn and 1:2 rod transmission designed to reduce hinge moment. The airfoil selected for the V-tail is NACA 0009.

A streamlined payload cladding was designed to reduce drag generated by the cargo crate. For this purpose, a NACA 16-021 profile was chosen for its thickness relative to chord length.

The control system was constructed using Matlab, Simulink, and the Aerosim package.

For longitudinal control the glider’s airspeed was chosen to be the major controlled parameter, since it has the most immediate effect on the glider’s range performance.

Lateral control was designed to keep a required roll angle, while closing in on a desired azimuth.