Technion and the Israel Space Agency announced yesterday that in late 2018, a group of three nanosatellites, which will fly in controlled formation, will be launched for the first time into space.  The satellite formation will be launched by the Dutch company Innovative Solutions In Space, which specializes in launching nanosatellites on the Indian PSLV (Polar Satellite Launch Vehicle).

The Adelis-SAMSON Project has been developed in recent years by a team of researchers headed by Prof. Pini Gurfil, Director of the Asher Space Research Institute and member of the Technion Faculty of Aerospace Engineering, and with the support of the Adelis Foundation and the Israel Space Agency. The goal of the project is to prove that a group of satellites can fly in a controlled formation for one year while orbiting at an altitude of about 600 kilometers.

“Israeli technology is breaking new ground and demonstrating its innovativeness over and over again,” said Science and Technology Minister Ofir Akunis. “We are proud to be part of this flagship project, which represents a significant contribution to the advancement of Israeli aerospace and the training of students in this field.”

The satellites will be used for receiving signals from Earth and calculating the location of the source of transmission for search and rescue operations, remote sensing, and environmental monitoring. The size of each of the satellites is 10X20X30 cm, about the size of a shoebox, and they weigh a total of around 8 kg. The satellites will be equipped with measuring devices, antennas, computer systems, control systems and navigation devices. The flight software and algorithms were developed in the Technion Distributed Space Systems Lab. 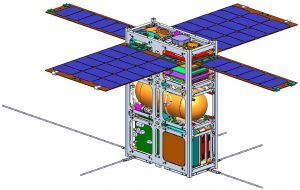 “Satellite miniaturization together with advanced Israeli technology will enable us to take Israel an important step forward in the field of nanosatellites,” explained Prof. Gurfil. “The degree of innovation here can be compared to switching from a PC to a laptop and then to a mobile phone, which offers far more capabilities than its predecessors.”

“The nanosatellite program was made possible through the generosity of donors from Israel and abroad who understand the importance of space exploration for the security and prosperity of the State of Israel,” said Prof. Boaz Golany, Technion Vice President for External Relations and Resource Development. “Technion thanks its supporters, led by the Adelis Foundation, for their important role in the realization of this program, and is proud of its partnership with Israel’s aerospace industry. Without the active collaboration with industry, the impressive technological achievements made by the Adelis-SAMSON program would not have been possible.”

The satellite’s unique technology is all “blue and white”: Rafael’s krypton gas-based propulsion system will be the first system in the world to power a tiny satellite. The digital receiver was developed by Elta and the guidance control system was developed at Israel Aerospace Industries MABAT plant in cooperation with researchers from Technion.

In addition to the propulsion system, the satellites will accumulate energy through solar panels that will extend from the sides of each satellite and serve as wings that will control the flight formation without the use of fuel, by means of air resistance in the atmosphere.  Each of the nanosatellites will be equipped with a digital signal receiver, one of the most complex receivers ever designed for a nanosatellite. The satellite information processing system and the algorithms that control the formation will be the first of their kind in the world and will support the autonomous operation of several satellites together. The communications and navigation system will include two GPS receivers to be used for autonomous navigation and a communications system to be used by the three nanosatellites in order to communicate with one another and with the ground station – a significant challenge that has been solved in the current project. A dedicated frequency will be used for sending data to Earth via broadband.

“If we manage to prove in space that flying in formation is possible,” said Prof. Gurfil, “it will be a major boost for the development of small satellites and technologies related to the miniaturization of electronic components, for efficient space processing and for space propulsion systems. The technologies developed in the nanosatellites will contribute to a variety of civilian applications and will promote Israel’s aerospace industry.”

Credit to the Technion’s Office of Spokesperson