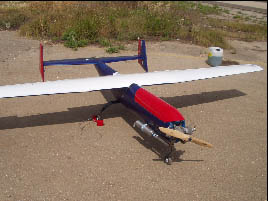 The objective of the team was to design and build a small uninhabited aerial vehicle (UAV) to be used as an In-Flight Simulator (IFS). The IFS is envisioned as a variable stability UAV, capable of representing the flying characteristics of most currently flying UAVs. It is destined to serve as a test vehicle for advanced flight control algorithms, and as a demonstration vehicle for study courses such as “control lab” and “flight mechanics”.

The UAV was built at the Technion workshop, and flew its maiden flight on April 30th, 2004.

An IFS (in-flight simulator) is a variable stability air vehicle, hence it can change its stability characteristics and dynamic behavior during flight. This enables the IFS to imitate the behavior of other aircraft, and to evaluate the handling qualities of different configurations—all in one configuration.

Lately, many new and innovative theoretical flight control concepts are available. In order to evaluate those concepts, computer simulations are being used. The main downside of this is that a computer simulation can only simulate what the programer puts into it, so it can never simulate the true world accurately. This is especially true in aircraft simulations, since the atmospheric model is always inaccurate, and so is the aerodynamic model of the aircraft.

Therefore, in order to test and evaluate those new flight control concepts, a stronger tool is needed, especially when “fly before buy” becomes more and more common among today’s customers.

The following reasons make the IFS UAV an ideal solution:

New flight control concepts can be evaluated in a large variety of cases and conditions using only one air vehicle, which has variable stability derivatives.

The cost of the IFS UAV is low in comparison to the large, heavy UAVs that it can imitate.

The IFS UAV can perform as a “fly before buy” demonstrator.

Besides the above, the IFS UAV is an ideal aeronautical student teaching tool, as it acts as a “flying laboratory”.

This configuration was accepted as the main configuration, and named Chameleon due to its ability to mimic other UAVs.

As has been mentioned before, the control surfaces are modular and therefore the Chameleon was designed to fly in several configurations:

In any case, all tail surfaces can be replaced or modified due to any reason that will arise.