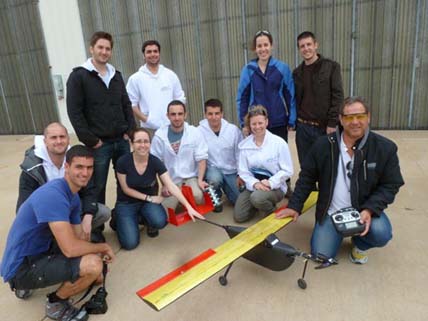 “DBF – Design Build and Fly” is an annual competition held by the AIAA and Cessna in the US.
Each year different missions are specifiedת trying to simulate real-life aeronautic challenges with limiting rules. This year’s competition simulated a passenger aircraft carrying passengers or used for cargo.
Initially, the competition rules were carefully studied. Score maximization was a key goal in the conceptual and preliminary stages. A designated Multidisciplinary Design Optimization (MDO) program was developed, revealing that when examining the trade-off between weight and performance, there is an optimal design combination of parameters, leading to a maximum flight score.
The aircraft was designed to be statically stable and withstand strong wind conditions. After examining several design concepts, conventional geometry of the main wing, back tail and tricycle type landing gear were chosen. The payload compartment was built as a modular structure that did not carry any of the structural loads, thus allowing this component to be light-weight.
This year’s competition includes three different missions. In each mission the aircraft is judged according to different parameters. The first mission assesses the speed and maneuverability of the aircraft. In this mission the numbers of laps flown around the flight course during a predefined time limit are scored. The second mission scores the aircraft weight with a payload of 8 aluminum blocks, simulating 8 passengers. The third mission scores the time of climbing to 100m. In this mission the payload should be a 2L water tank, which must be lifted to 100m altitude and then emptied. The water release is part of a time-end indicating system, assembled with the water tank and including a servo-valve for opening the water tank which is activated by an altimeter.
Wind research was performed considering recent wind velocities at the competition location, Wichita, Kansas, showing a relatively high average wind speeds. Special care was given both to profile and wing area selection, to allow operation under high winds. Furthermore, the selection of the propulsion system verified that the aircraft will be able to overcome high winds. The designed aircraft is able to fly when fully loaded with approximately 2.1kg payload. The maximum airspeed that can be achieved when flown without payloads is 24.8 m/sec and the cruise speed of this configuration is 21.5 m/sec, enabling completion of 6 full laps in 4 minutes.
The competition was held on April 13-15 in Wichita Ks. It started with a technical inspection which Spitwater qualified on the first trial.
Missions:
1. The Spitwater completed 6 whole laps within the assigned 4 minutes. The maximal laps conducted in the competition were 7.
2. The Spitwater managed to complete the second mission in spite of severe strong winds in the airfield.
3. Day 3 of the competition was cancelled by the organizers due to a  tornado and severe weather. However, during flight tests that were conducted two days prior to the competition, the Spitwater successfully completed mission 3 in 26 seconds.
At the conclusion of the missions, the Technion Spitwater team achieved 10th place overall.