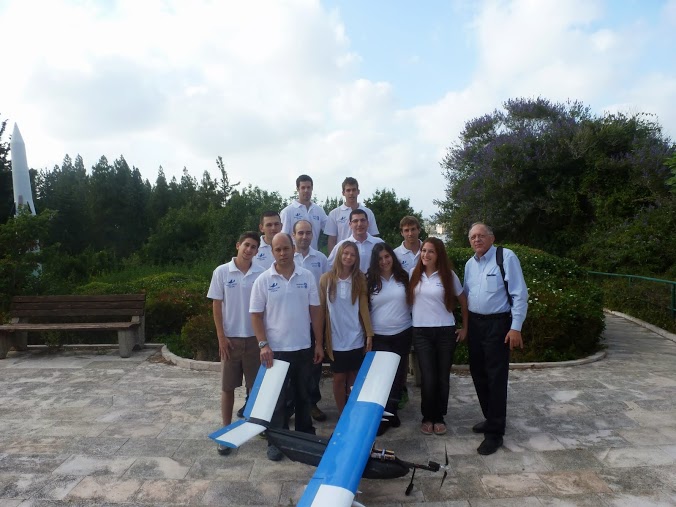 DBF (Design Build and Fly) is an annual competition, held in the US and conducted by AIAA. Every year, a new set of rules is published, trying to simulate real life scenarios that future aeronautical engineers will deal with in their career. This year’s theme was stealth UAV with the ability to carry internal and external payload (toy rockets) and the ability to take off from a 30×30 square ft. austere field.

A few aircraft geometries were investigated by the team, 3 prototypes were built and flown, and eventually a standard configuration was chosen: a rectangular wing, a V-tail, a main tube body and a payload carrying pod. The aircraft’s main structure was based on carbon fiber tubes, which have the highest strength-to-weight ratio. The internal payload compartment was built as a separate structure, which was not part of the aircraft’s body. This specific design allowed easy aircraft loading with its third mission payloads. The UAV was not designed for high airspeeds but for high lifting capabilities, meant to maximize the team’s competition score, as well as to allow it to take off within the limits of the competition rules.
The manufacturing of the aircraft took almost 6 months. During that time, advanced techniques were explored and implemented, such as working with composites, CNC and laser cutting. Extensive flight tests were done in order to validate the aircraft performance and its ability to perform the competition’s missions.
The designed aircraft is able to lift 1.36 kg, approximately 34% of its maximum takeoff weight. The airplane’s payload compartment is designed to carry 9 internal rockets, and the wings can carry up to 6 external rockets. The maximum airspeed that can be achieved when flown without payloads is 24 m/sec, and the cruise speed of this configuration is 20 m/sec.
The competition was held on April 19-21 in Tucson Az. In order to perform final flight tests prior to the competition, which simulate the true conditions of the competition, the team arrived three days prior to the competition.
Unfortunately, our team pilot didn’t get Visa on time so we had to look for a pilot. We found a local pilot and did a couple of familiarization flights with him. The competition commenced with a technical inspection, in which the Mazlatov qualified on the first trial.

Missions:
Mazlatov’ completed 4 laps in 3.5 minutes. Then the batteries ran out and the pilot had to land the aircraft.

In conclusion of the missions, the Technion Mazlatov team achieved the 12th place overall out of 81 teams and 5th place of the flight score.