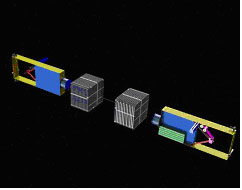 A growing swarm of ~15,000 pieces of large debris in are being tracked by NORAD radars. Such a cloud of debris would prevent any future launching of new spacecraft. In the worst case scenario, this could happen within the next 50 years. The Dream-Catcher’s main objective is to clean up the debris orbiting LEO. The most important requirements from such a spacecraft will be
•          A Huge delta-v budget
•          High maneuverability
•         Long-lasting missions with multiple work cycles
Reactive and chemical engines cannot provide the required delta-v (hundreds of km/sec) so the concept of E.M tether was selected. The main idea is propulsion by the Ampere force induced by the tether’s interaction with the geomagnetic field.
After examining the aspects of controllability, stability, and deployment requirements, a linear configuration was found preferable. Aluminum (6061) was chosen to ensure high conductivity and lightweight. The total length of the tether is 2 [Km], with mass of [370] Kg, where each unit able to catch up to 200 targets. In a folded configuration the tether can be fitted into a 1m X 1.5m X 2.5m cube.
The capturing is executed by two capturing mechanisms which are located in each end of the tether. The catcher-net mechanism design ensures disposability, lightweight and relatively small diameter.
To overcome the perturbing forces and torques resulting from the tether’s nature of motion causing orbital and rotary dynamics to strongly interact, a simultaneous control system of these two motions was designed and tested by a computer program simulation.
In order to cope with the higher precision required during the catching phase, relative G&N law was formed for close approach. The motion-forecast dynamic model deals with the possible uncertainties encountered during the close-up phase. For this purpose several filters were studied during the design process. The chosen filter was Kalman (extended). The filter results for both close and far relative orbits are demonstrated and discussed.
A top-level system hierarchy was designed where each spacecraft is a part of a ground-controlled flotilla, in which each unit is assigned a specific inclination range, with multiple vehicles at highly debris-populated inclinations. A computer simulation of a 20 spacecraft flotilla, predicts an average de-orbiting rate of approximately two debris per day, meeting with great certainty the desired project goal of at least maintaining a safe status-quo balance between the newly-generated and already-removed LEO debris populations.