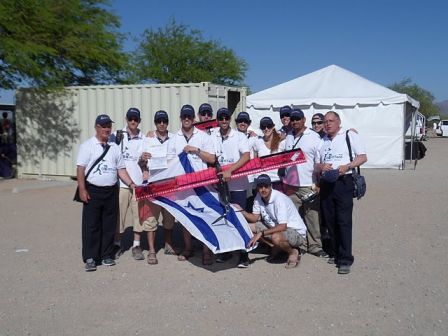 DBF (Design Build and Fly) is an annual competition, held in the US and conducted by AIAA. Every year, a new set of rules is published, trying to simulate real life scenarios that future aeronautical engineers will deal with in their career. This year’s theme was a soldier assist UAV – a small and light aircraft that can be carried inside a standard carry-on suitcase, ready to fligh in 5 minutes, and launched by hand. The aircraft were judged on speed, empty weight, and payload carrying capabilities.
A few aircraft geometries were investigated by the team, and a standard configuration was selected: rectangular wing, T-tail, main tube body and a payload carrying pod. Due to the high uncertainties that the team was aware of, derived from short time and expressed in lack of ability to test and simulate subsystems during the design process itself, the aircraft was modular, assembled from minimal sections where possible, and was modified after flight tests. In order to minimize the weight of the aircraft, the team avoided every system that was not necessary, such as a landing gear, and implemented advanced structural design based solely on thin walled tubes.
The manufacturing of the aircraft (one prototype and 2 competing models) took almost 6 months. During that time, advanced techniques were explored and implemented such as working with composites, CNC and laser cutting. Although UAV manufacturing was a new field to almost all team members, the aircraft was built to very high standards, as later mentioned by competition judges.
During the manufacturing of the competing models, all flight scenarios were tested on aerodynamically similar, fast produced prototype. The flight tests were successful, and approved aircraft design as stable but maneuverable. In parallel, wind tunnel tests were performed to select the best suitable propulsion system. After the completion of the first competing model, more tests were carried out, now using telemetry devices. The second competing model, first flown in the US was chosen to be the aircraft to represent the team in the competition. All in all, 80 flight tests were performed, with no crash record. In almost every field, the flight parameters were better than predicted by simulations during the design process.
Arriving three days before the competition, the team had just enough time to check the performance of the aircraft under conditions specific to the Tucson climate. In the competition itself, the aircraft was clearly one of the best designed, built and flown. The team finished the certification process on their first attempt, and completed two of three missions on the first day (while many teams did not even receive their certification).
The Technion team and the aircraft “GolfiTech” were placed 8th  out of 82 participants and received the best report (ever) award.
Main parameters
·          1.89 m wing span
·          25 cm wing chord
·          Aspect ratio of 7.56
·          Wing loading 9.9 kgf/m2
·          S1223 main wing airfoil
·          Empty weight: 1.8 kg
·          Maximum takeoff weight: 4.7 kg
·          No landing gear
·          Maximum speed 17 m/sec
·          Static Thrust: 2.1 Kgf
·          Power: 400 W
·          Capable of carrying 66 golf balls