“The tools developed in favor of space engineering can contribute greatly to medical understanding and the improvement of medical treatments,” said Prof. Ephraim (Effie) Gutmark of the University of Cincinnati at the 58th Israel Annual Conference on Aerospace Sciences (IACAS) held last week in Tel Aviv and the Technion. Prof. Gutmark, who completed his three academic degrees at the Technion, is currently a professor of aerospace engineering and otolaryngology at the University of Cincinnati and a member of the American Society of Physics. He spoke about biomedical applications of discoveries in aeronautical research, including innovative treatment of sleep apnea and revolutionary surgery to restore speech to people who could not speak for decades. “The traditional medical paradigm,” said Prof. Gutmark, “is that the function of a limb is derived from its shape, so if the shape goes wrong and cannot be reconstructed, it is impossible to repair the damage. We understand today that this is not true – for example, in the case of severe damage to the vocal cords. In the past it was assumed that the functioning of the vocal cords depended on their flexibility, and this loss of flexibility was irreversible. We have shown that this paradigm is wrong and that the vocal cords can be restored to function based on aerodynamic principles of flow separation and air-acoustics. The possibility of harnessing aerodynamic principles to the world of medicine opens up many fascinating possibilities.”

Prof. Gutmark received the Meir Hanin International Aerospace Prize, awarded to prominent researchers for a significant contribution to the field of aerospace. 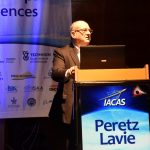 Prof. Peretz Lavie, President of the Technion, who congratulated the participants at the opening of the second day of the conference at the Technion, joined Professor Gutmark in saying that science is becoming increasingly inter-disciplinary and that the Technion has developed a model based on interdisciplinary centers and institutes that serve as a model for universities around the world. Moshe Medina, Vice President of Engineering and Development at IAI and Chairman of the Organizing Committee of the 58th IACAS, a graduate of the Technion (Faculty of Aerospace Engineering), was released from the Israeli Air Force with the rank of colonel after heading the Israeli delegation in the future F-35 fighter jet project in Washington.

Maj. Gen. (res.) Amos Yadlin, former head of Military Intelligence, reviewed the “balance of Israel’s national security – a call for a comprehensive strategy” in the wake of recent developments in the region. 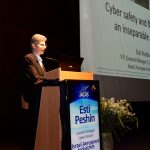 Esti Peshin, head of the cyber division at IAI, spoke about the need to improve cyber security in airplanes as part of the flight security. “The modern jet is a flying information center,” said Peshin, giving the keynote lecture on the second day of the conference, “And the vulnerability of aircraft in the context of cyber has been demonstrated in the past. Cyber ​​attacks can lead to very dangerous scenarios such as false updates to the flight crew, panic among the passengers, planting malware on the plane, disruptions to the flight and the creation of a virtual aircraft that misleads the ground control stations. In such a complex subject, cooperation is needed at the national level. It is important to teach the pilots how the aircraft works in terms of cyber. It is also important that the general public knows that there is no choice but to tighten cyber regulation on flights in the coming years.”

Technion graduate Vadim Leiderman described the assimilation of the “Dreamliner” (Boeing 787) into EL AL. “The world of aviation is moving towards operational flexibility, long flight ranges and reduced operating costs, and the Dreamliner is the golden standard of technology in these aspects as well. Its introduction into EL AL was a long and complex process that gave us an opportunity to examine ‘sacred cows’ and break down thinking barriers. ”

Lt. Col. Erez Ezer of the Israeli Air Force presented the challenges of adapting the F-35 stealth fighter aircraft (“Adir”) to the Israeli Air Force’s needs, saying that “this plane brought us into the fifth generation of aircraft and Israel was the first country outside the US to use it. On the day the plane arrived here, it was launched alongside other aircraft – the result of many months of training the teams and simulator training.”

In a special session of industrial projects, the conference presented a platform for lectures that present a revolution in the world of aviation: Moshe Atar of IAI presented the challenges of the process of obtaining accreditation and technology development for an unmanned aircraft; Omar Bar Yohai, founder of Aviation Aircraft, described the development of a mid-range electric plane for civil aviation; Eyal Regev of ParaZero – Drones Safety Systems gave a comprehensive review of safety solutions for unmanned flights and autonomous flights.

The conference brought together the best experts in Israel and abroad on various topics in the world of aerospace. Seven plenary lectures by world-renowned experts were presented during the conference, as well as approximately 120 scientific articles from 14 different countries on diverse research and development, including autonomous aircraft, cluster flight in space and the French-Israeli project Venus – a scientific satellite for precise agricultural research and electric propulsion. 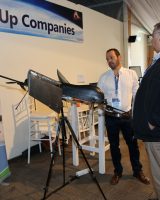 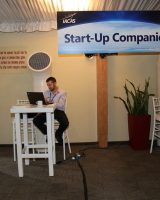 As part of the conference, a new panel was held on the new space initiatives, New Space, and the reciprocal relations with Israeli academia.

Every year, the conference gives platform for students to present their projects in a student-project competition. Prizes are awarded in two categories – Research/Experimental project and Design project. This year’s prizes were awarded ro David Kaiser of the Faculty of Mechanical Engineering (under the supervision of Prof. David Greenblatt) for his Research project; and to a joint team of students from the Faculty of Aerospace Engineering and the Viterbi Faculty of Electrical Engineering (supervised by Dror Artzi) for their Design project. 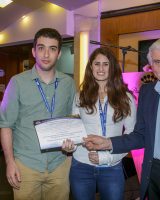 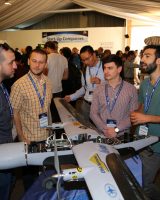 In the past six decades, the annual aerospace conference has been a major event in the life of the Israeli aeronautical community. Approximately 550 engineers, scientists and experts in aeronautics and astronautics from Israel and around the world participate in it on a regular basis. The conference is organized by the main organizations involved in aerospace in Israel, among which are the Israeli Ministry of Defense, the IDF, the Israel Aerospace Industries, Rafael, IMI Systems and Elbit Systems, and of course the academia – the Technion, Tel Aviv University and Ben-Gurion University of the Negev.

(Thank you to the Technion Spokesperson’s Office)