The Future of Aerospace Unveiled at Technion Israel

“The State of Israel must ensure its place at the forefront of research and development in the aerospace industry,” said Dr. Ami Appelbaum, Chief Scientist and the Chairman of the Board of Israel Innovation Authority, as he opened the 59th Israel Annual Conference on Aerospace Sciences (IACAS) held in Tel Aviv and Haifa and led by the Technion – Israel Institute of Technology.

The most important event in Israel in the fields of aviation and space, it was attended by some 600 engineers, scientists and other experts from Israel and abroad. The conference was led by the Technion – the only academic institution in Israel that has a faculty of aerospace engineering. The Technion Faculty, founded in 1954, has trained and continues to train the engineers who have led and are still leading Israel’s aviation and space industries. The event takes place under the leadership of Prof. Emeritus Mordechai (Moti) Karpel of the Technion’s Faculty of Aerospace Engineering. 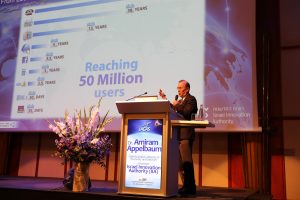 Dr. Ami Appelbaum, Chief Scientist and the Chairman of the Board of Israel Innovation Authority

Dr. Appelbaum presented the meteoric pace of innovation in recent decades. “We are in a place similar to that at the beginning of the Industrial Revolution,” he said. “The innovations that await us in the coming years will completely change our lives, including the social and cultural aspects. There is no doubt that one of the areas in which a revolution is expected is space exploration, and the State of Israel must ensure its place at the forefront of this industry in order to preserve its economic and security strength.” 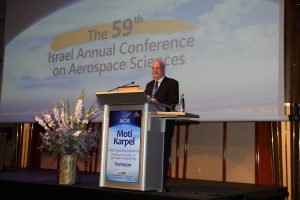 “Aeronautics is rapidly evolving into new directions, such as unmanned vehicles, where Israel is definitely leading, and there are many challenges of implementation, coordination, and security,” added Prof. Karpel of the Faculty of Aerospace Engineering, chairman of the 59th IACAS Organizing Committee.

On the second day, which was held at Technion City, Technion’s Senior Executive Vice President Prof. Adam Schwartz said: “The field of aviation engineering is an excellent example of cooperation between academia and industry. The industry is a source of interesting practical questions, and academia has the resources to develop answers to these questions.”

The dean of the Faculty of Aerospace Engineering, Prof. Itzchak Frankel, said that “this conference is a powerful demonstration of the aerospace world and an expression of that vital cooperation.”

Speaking on the theme “Aviation’s Third Revolution: Challenges and Opportunities”, ICAS President Dr. Susan Ying said: “We are at the threshold of the third revolution in aviation, a revolution that will bring upon us countless developments and opportunities. The first stage began with the Wright Brothers and ended with the invention of the jet. We are now moving on to the next generation – electric aircraft. After 70 years of jet aircraft, we are moving on to the next stage, because conventional planes produce inconceivable pollution and by the middle of this century, it could become the most polluting industry.”

Ying was born in Taiwan and grew up in Indonesia. After graduating high school, she moved to the US, and on one of her bicycle trips she came upon a flight school where she enrolled in flight lessons, and later went on to work there. At the same time, she completed her undergraduate studies in aeronautical engineering at Cornell University in New York and received her doctoral degree at Stanford University in California. 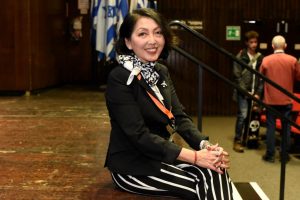 In the following years, she worked in various organizations in the field – including NASA – and was even accepted into an astronaut training course. From there she moved on to Boeing, where she worked for 20 years. She left Boeing a few years ago and in 2016 joined the start-up company Ampaire, where she serves as Vice President of Technology Strategies. The company employs 15 people and develops electric aircraft that will reduce operating costs and environmental damage from pollution and noise.

“The technological acceleration in the world of aviation, as in other fields, creates a space of unlimited opportunities – Wide Open Space – in a market estimated at $260 billion over the next decade,” she said, adding that the revolution will begin with short flights, where the advantage of the electric plane is particularly noticeable. “We’re talking about an 80 percent drop in energy costs and about 50 percent in maintenance. There are many moving parts in a regular plane, but the plane we are developing has only one moving part – the rotor.”

The conference also featured a Student Project Competition, in which two prizes in memory of Dr. Shlomit Gali were awarded. One went to the Technion’s Formula project aerodynamics team, supervised by Michael Kootzenko. The other went to Kadmiel Karsenty for his research project on “An improved diesel circuit of small aircraft flying at high altitudes”, supervised by Prof. Eran Sher. 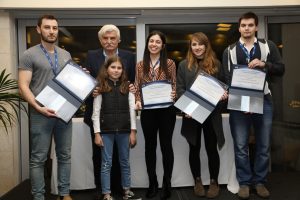 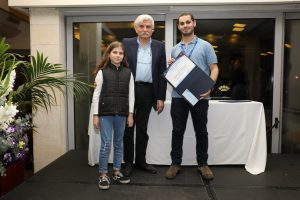 Dov Gali awarding the 2019 prize in memory of Dr. Shlomit Gali to Kadmiel Karsenty for his research project

Dr. Shlomit Gali was born in Haifa in 1945. Dr. Gali completed three degrees at the Technion Faculty of Mechanical Engineering. During her undergraduate studies, she was the only female student in all of the four graduating classes studying at that time. In 1964, she met Dov, her future husband, who was a student in the Faculty of Architecture. After her post-doctoral studies at Imperial College in London, she worked in the US Air Force laboratories until she was asked to join the Lavi project at Israel Aerospace Industries. She went on to Israel’s Ministry of Defense, where she headed the department of technological infrastructure in MAFAT (the Administration for the Development of Weapons and Technological Infrastructure). She passed away in 2011.

Credit and thanks to the Technion’s Spokesperson’s Office