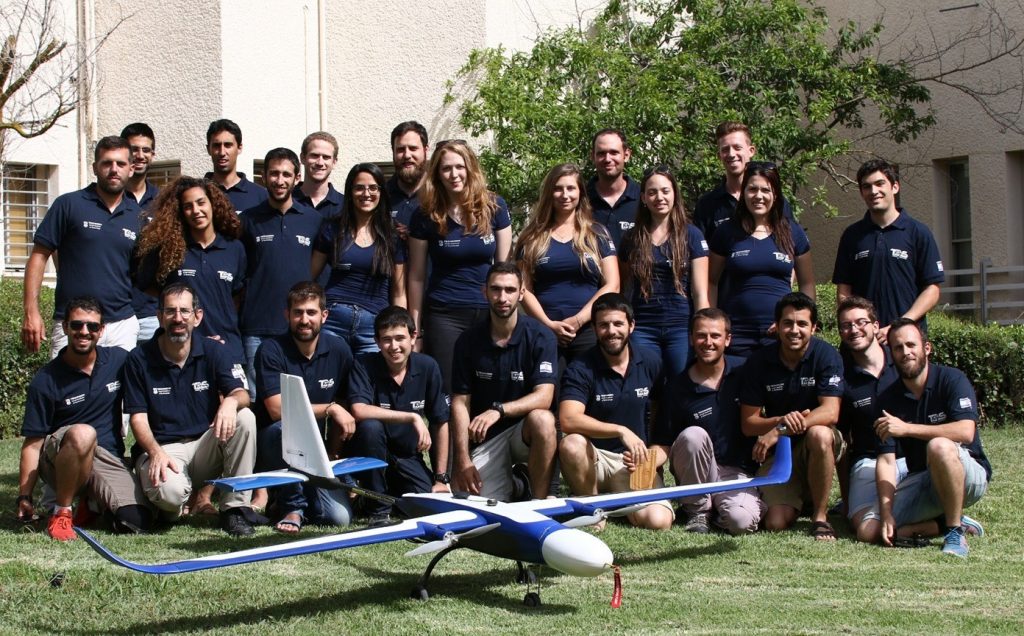 The Technion Aerial Systems team, composed of students from the faculties of Aerospace, Electrical, Civil and Industrial Engineering, carried out the design, manufacture, flight testing and field deployment of an unmanned aerial system for search and rescue tasks, ranking high in the competition held in Maryland.

The project was conducted as the Technion’s entry to the AUVSI (Autonomous Unmanned Vehicle Systems International) “Student Unmanned Aerial Systems” Competition for year 2018.

With work beginning in late August 2017, the team began by analyzing last year’s product in order to familiarize itself with it and be able to propose, design and test improvements to it.

The major improvements made were the addition of 3D-printed winglets for improved aerodynamic performance, the integration of an improved flight computer, Pixhawk 2, heightened geolocation accuracy through the use of a GPS+ Real-Time Kinematics (RTK) sensor, the repositioning of the landing gears for improved ground performance, weight reduction via structural redesign, and improved algorithms, providing a much more robust obstacle avoidance system and increased payload delivery accuracy.

The team explored different materials and manufacturing processes for the winglets, eventually settling on 3D-printing them from Nylon-12, first using an SLS (Selective Laser Sintering) process and later on using an FDM (Fused Deposition Modeling) process, both of which proved to be more than satisfactory, providing a good surface finish and good fit to the existing platform. The winglets themselves were designed according to established guidelines taken from the scientific literature and validated using CFD software. After finalizing the design and testing the finished product, the models proved to be accurate, as the platform managed to fly for extended periods of time despite the added weight.

The Pixhawk 2 flight computer was selected as the flight computer to improve over the older Pixhawk 1 used on the previous team’s platform. It supports more input channels and a wider range of flight sensors, paving the way for the use of the RTK module, which elevated the geolocation accuracy.

The landing gear system was reviewed after it was estimated that it was detrimental to takeoff and landing performance. The analysis showed that the main gear was positioned too far back, making it hard for the platform to rotate during takeoff and yielding hard impacts on landing. Following this analysis, a proposal was made to move the landing gear forward by 100 mm, a proposal that was tested in-flight using the previous year’s platform and later implemented into the current platform.

An initial weight saving effort was the removal of the middle layer from the wing’s sandwich structure. Around the root of the wing, the balsa wood core was maintained to allow the structure to withstand the higher loads, however from the rest of the wing it was removed, resulting in a lighter, more flexible wing. Another, more major weight saving effort was applied to the fuselage, through the redesigning of its layer structure – removing an entire layer of carbon-fiber, allowing for a 30% weight reduction in the fuselage’s weight.

The structure was tested against its design load and safety factors using bending and torque load experiments, which validated the design by showing that the structure stands up to the requirements.

A new algorithm was devised for obstacle avoidance. Departing from last year’s cumbersome and computationally expensive “Rapidly-expanding Random Tree” approach, the new algorithm reads in the stationary obstacles from the judge’s server and replots the original route such that the platform would overtake the obstacles using a single calculation, taking into account the boundaries of the flight area, the dimensions of the aircraft and its maneuvering capabilities, all the while minimizing the deviation from the original track. To tackle dynamic obstacles, the algorithm runs continuously in real-time, kicking into action whenever an upcoming collision is detected.

The air delivery algorithm also departs from last year’s approach, albeit the other way around: last year’s air delivery algorithm was too simplistic. To allow for an accurate delivery of the load, the air drop flight path lines up into the wind and the algorithm takes its effects into account. It runs continuously in the background to predict the distance at which the load will land from the target. If the distance is acceptable, or if the platform reaches a minimal horizontal distance from the target, the load is released.

Both algorithms were tested using software-in-the-loop simulations which take into account all aircraft and different environmental parameters, and once simulated perfection was reached, they were field tested with the results being more than satisfactory.