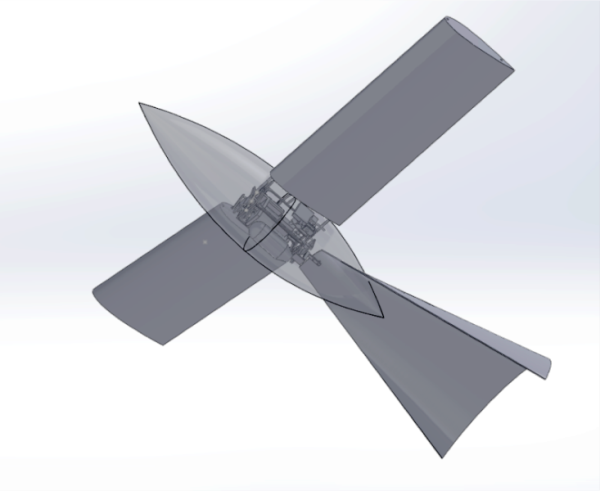 The “Birdinator” project’s main goal was to understand the mechanics of a bird’s flight in nature, in order to later design and build an artificial bird, resembling a real bird as much as possible to both in appearance and flight mechanics. To complete such an unusual task, a list of quantitative requirements was constructed, based on an observed performance of a bird of the same size scale as decided on in the beginning of the project. The mechanical bird must be able to maintain a level flapping flight for 10 minutes and endure a climb rate of 3 m/s (consistent with the wind gusts that a bird of the same scale faces in nature). The velocity range is 10-20 m/s and the bird must be able to carry a payload of 20 grams.
The first step of our design process was to gain full understanding of the bird’s flight specifics. To complete the theoretical basis, a theory about flapping flight was developed by the project supervisor. A performance program was built based on the theory, to serve as an early stage design analysis tool.
Among the main conclusions in the project research phase was the understanding of the need to design a flapping mechanism that produces both thrust and all the required control inputs. Essentially this is the difference between a mechanical bird and a standard ornithopter.
The mechanical flapping mechanism developed allowed us to create both constant and periodic twists, symmetrical and a-symmetrical twists. A symmetrical periodic twist creates thrust while a symmetrical constant twist creates a pitching moment. An anti-symmetrical periodic twist creates rolling moment whereas an anti-symmetrical constant twist generates the yawing moment.
The nature of the mechanical flapping mechanism allowed us to use the bird’s tail only to achieve stability in both lateral ad longitudinal planes. Flat and arched configurations were tested and a theory about the subjects of wing-tail and wing-body interactions was developed by our supervisor. Upon verification and calibration, using wind tunnel experiments, these theories were used to determine the tail’s exact dimensions to meet the stability requirements.
4 degrees of freedom (longitudinal 3 DOF + flapping motion) simulations were created, to test the behavior of the craft and to design and test control systems. In the second semester, simulation was expanded to 7 degrees of freedom (6 DOF + flapping motion) to test the lateral behavior of the craft and to its performance capabilities. The simulations provided proof that with a longitudinal control system our mechanical bird can meet all the initial requirements. The simulations were also used to verify the performance program’s validity.
To fulfill the need for detailed design, an iterative sizing process was utilized. It was used to determine the weight and dimensions of all system components, and verify the design feasibility at each stage. The program calculates the mass of each component separately and checks that the total mass is smaller than the one initially assumed for the bird (in our case 0.5 kg). The sizing process is based on a number of evaluation methods, including detailed design in a CAD program, finding specific components, and “rubber components” weight assessment. During the sizing process a comprehensive market research was performed to enable for bird build in the next phase. This tool, along with the highly detailed design process and the simulation results brought the conclusion that the mechanical bird is possible!