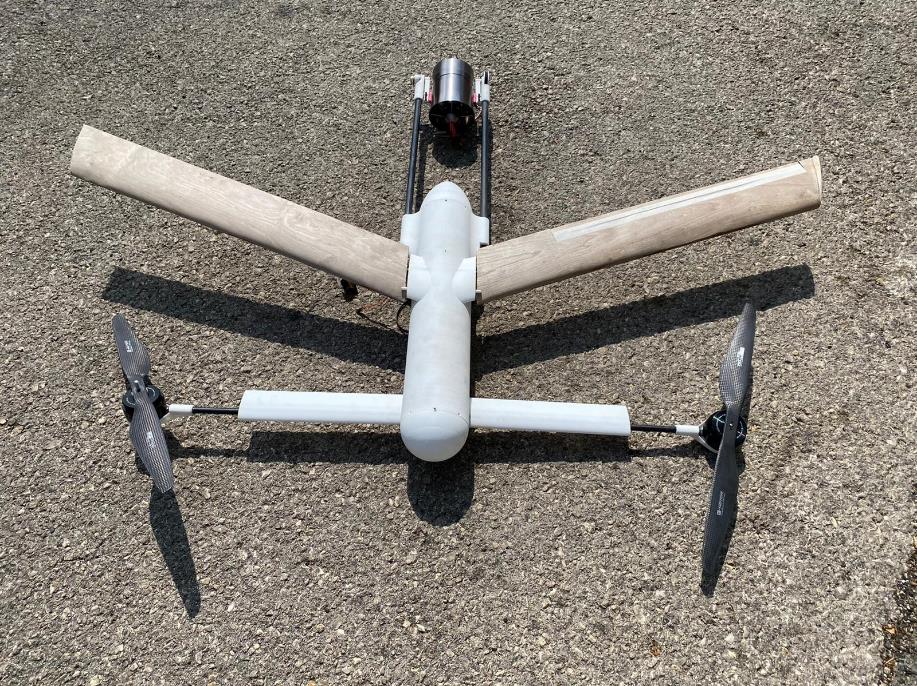 A final project in the Bachelor of Aeronautical and Aerospace Engineering at the Technion: the aim is to develop an aircraft capable of front observation and image transmission for naval forces, combining the ability to take off and land vertically from a deck, make a transition to fly forward at speeds of up to 50 meters per second, and a half-hour hovering above destination. All this while carrying a beneficial cargo of up to 3kg and transmission capabilities to the operator.

This document summarises the work of the fourth and final year of the project. This year we finished the design and manufacturing of the prototype, which is half the size of the original aircraft, planned to reach maximal velocity of 30 m/s instead of 50 m/s.

Work on this project includes theoretical and practical work at several disciplines such as aerodynamic, structure, control, performance etc. In addition to the work done in the previous three years, this project also relies on the aid of industry and faculty experts.  This project is unique in that that it involves collaboration with students from San Diego State University’s Faculty of Engineering, led by Yossi Katz. The cooperation revolved on weekly video conferencing, data sharing and working methods, consultation, and joint study of the issues. The highlight of the collaboration was the visiting of the SDSU students in the Technion, a reciprocating visit was cancelled due to the pandemic. The visit and sessions strengthened the collaboration and learning of the two groups.

This year we focused on finishing the design and starting production. The control team developed the drone’s EOM with consideration of the effect of the three motors on the angular momentum. The aerodynamic forces and moments were modelled and implemented to the 6DOF model for vertical and horizontal flight using SISO design methods. In order to finish the full control model, the transition model (between the vertical and horizontal flight) and was implemented as well. The full control system has been simulated and tested for variance of interferences. Finally, technical work on the Pixhawk and the other probes has been done, in order to implement them to the aircraft.

Over this year, the structural design of the model was finalized and constructed. This included the development of the front and back motor rotation mechanisms.  The fuselage was redesigned to connect more efficiently to the wing and allow for a removable tray to hold the battery and Pixhawk. The landing gear attached to the fuselage was also updated. In tandem with the aerodynamics team, a redesign of the winglets was considered, with the possibility to convert the winglets into landing gear.

The aerodynamic team has planned and conducted two static experiments on the front motor (with and without the rotors), and fully planned a wind tunnel experiment, in order to finish the thrust model for the entire model. In addition, a comprehensive analysis of the wing chord was performed to find the optimal chord length considering lift versus drag.