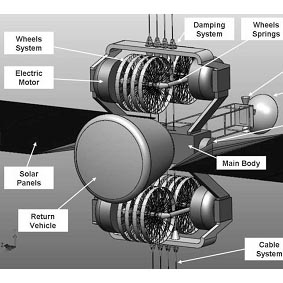 Our mission was to design a space elevator, including all of its subsystembs:

All of these subsystems were combined into an idea we called Jacob’s Ladder in order to provide a cheaper alternative to the currently used rocket-based ways of transportation between the Earth and the Moon, thus allowing the importantion of large amounts of He3 that can be used as a good source of energy to the planet.

Main Parameters of the Design:

3)  At expected rate of 5 ton payload per year, payoff for 15B$ construction and deployment cost, in 5 years.