Space Autonomous Mission for Swarming and Geolocation with Nanosatellites (SAMSON) 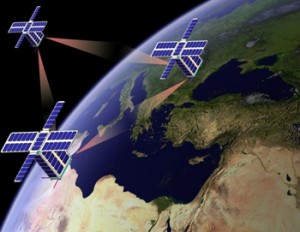 Space Autonomous Mission for Swarming and Geolocation with Nanosatellites (SAMSON) is a new satellite mission, led by the Technion and supported by IAI, RAFAEL, Elbit Systems, SPACECIALIST and other partners. SAMSON will include three nano-satellites, built based on the CubeSat standard. The mission is planned for at least one year, and has two main goals:

Additional payloads may include a micro Pulsed Plasma Thruster (PPT) and a new space processor. The configuration of each satellite will be a 6U CubeSat. The mission is planned to be launched in 2016. The three satellites will be launched together with the same semi-major axis, eccentricity and inclination and separated in orbit to form a cluster with relative distances ranging from 100 m for the closest two, to 250 km for the farthest two.  One satellite will be designated as “leader”, and the others would serve as “followers”.  The followers will perform relative orbital element corrections to satisfy the relative distance constraints. The satellites will have the ability to switch roles if commanded from ground.

The students’ project is done in parallel to the work of the Asher Space Research Institute (ASRI) and is led by Mr. Jacob Herscovitz. Mr. Herscovitz guided us weekly and supported us in our preparations for the demonstrations of PDR and CDR at the end of each semester, respectively.

Our goal was to do operation research on wanted issues, point at failure or success at checked issues, and suggest improvements that can be done.

Our work has started at October 2014 and has been done at pairs and as a group until July 2015. The subjects that were researched and team members: