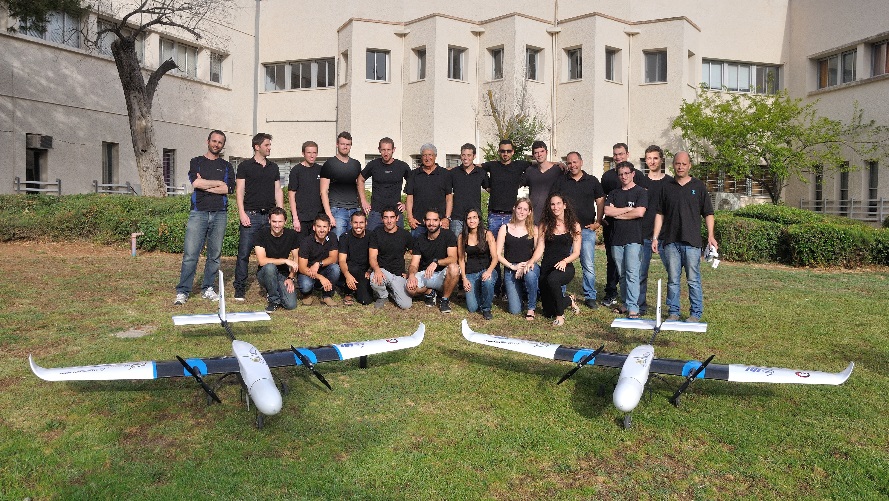 The Technion team, made up of students from the faculties of aerospace and electrical engineering, was awarded second place in a prestigious international competition held in Maryland, USA.

A student team from the Technion, under the supervision of Dror Artzi, Amit Aides and Itai Orr, won second place (out of 55 teams) in a prestigious competition held by the Association for Unmanned Vehicles Systems International (AUVSI), which took place last weekend in Maryland, USA. The international Student Unmanned Air Systems (SUAS) Competition attracts students from universities all over the world, yet most of the competitors are from the US.

The Technion team, which included students from the faculties of aerospace and electrical engineering, were among the 32 teams that made it to the flight course round of the competition and ultimately won second place. They developed two airborne systems that performed autonomous flight, target identification, aerial cargo delivery and obstacle avoidance, all while maintaining communication links to the ground station. Each aircraft was installed with advanced systems including a stabilized camera, an airborne computer image processing and communication system for controlling, monitoring and transferring images.

The competing teams were allotted 20 minutes to deploy their systems, including setting up their ground station. The team’s UAV flew for 26 minutes, during which time it performed the following tasks – autonomous navigation, search area coverage, identification of ground targets, image classification and identification of an off-axis target. All this, while performing autonomous flight and data transmission in real time to the ground station. In addition, the Technion was the only team to autonomously avoid obstacles placed in the flight zone.

The competition also demanded performing a Flight Readiness Review, and in this category the team received many compliments from the judges. For writing the engineering document (Journal Paper) the team earned the highest points and ranked in first place.

In the nine months leading up to the competition, the students on the team carried out trials in systems development including aircraft development, complex experiments and analysis, operating a whole system based on Crew Resource Management (CRM) and operational deployment performance. “We received help and support from several companies and organizations,” said Dror Artzi, “Including RAFAEL, Israel Aerospace Industries, Elbit Systems, KAL-KAR Ein Carmel, DHL, IntelliTECH, Intel, YeshGo Electronics, Technion’s Department of Electrical Engineering: particularly its Ollendorff Center and Vision and Image Science Lab (VISL), the Aerospace Faculty, and the Technion at large. The team members demonstrated at the competition the high academic standards of Technion’s future graduates, and presented anew Israel’s exceptional capabilities in developing integrated systems and unmanned aerial vehicles.”

“This has been an incredible experience for us, we feel well rewarded for all the hard work that was invested in this project. The students worked very well together all year and their achievements here is the product of their efforts. Their impressive achievements in the flight and system operation portion of the competition can be linked to the learning process and engineering knowledge they acquired throughout the year.”