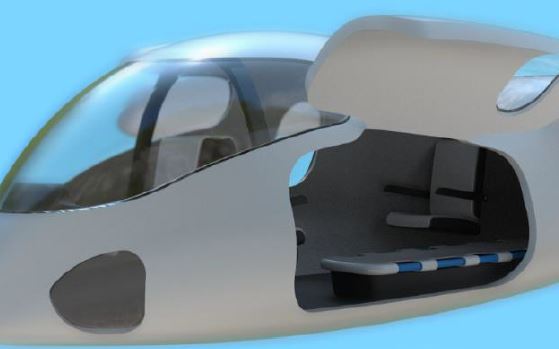 In recent years there has been a massive growth of metropolitan cities all over the world. As a result, there has been an increase in traffic and congestion on the roads, leading to a demand for urban air vehicles. An urban plane that takes off vertically is no longer a dream. Today, many vehicles in various configurations that take off vertically are in development at different stages. Ideally, in the near future such quiet and non-polluting vehicles will be common in big cities and will be used to transport passengers and luggage with high availability and speed. Moreover, such vehicles will solve mobility problems within and outside the city.
As part of our final project in the Faculty of Aeronautical Engineering at the Technion, we planned a preliminary design for two configurations of urban vessels that take off vertically and are powered by electricity.
1. The Dragonfly configuration in collaboration with the Faculty of Mechanical Engineering at the Technion – this aircraft can carry a pilot and additional passenger and serves as an air taxi in urban areas. The aircraft includes a small vehicle that can be separated to transport the passenger and is driven by the pilot. The vehicle can then be reconnected to the aircraft.

2. The SAVIOR configuration in collaboration with the Faculty of Architecture – a vehicle that is capable of containing a pilot, an injured person and two qualified medical professionals (paramedics), whose job is to evacuate an injured person from an urban or crowded area.

The first part of the report shows the execution of the initial design for the configurations. This process included considerations for configuration selection, weight calculations, initial aerodynamic design, and propulsion system design, based on professional literature. The design was carried out according to the requirements of the mission profile, which included vertical takeoff, acceleration to cruising speed, flight to the destination to a distance of 150 [km] (including maneuvers) and vertical landing at the destination.
During the year, the project was converted to a new configuration – SAVIOR, for which an additional design process of the fuselage, cockpit, and cabin space was carried out, so that it would fit the new requirements as mentioned above. As part of this work, there was close collaboration with an industrial designer while emphasizing the design aspect of the aircraft. The design was carried out in SolidWorks software.

Analyses were performed to determine the lift profile using Schrenck’s approximation to find the distribution of the lift along the wing, and to understand the loads acting upon it. In addition, a flight envelope was constructed, and the stability and control derivatives were calculated for the controllers’ design, as well as the construction of a 6DOF simulation. Simultaneously, a propulsion simulation was constructed to analyze the take-off and landing stages when aerodynamic lift forces do not act upon the vehicle. The simulations were built using MATLAB and SIMULINK software, while analyzing the dynamic system, calculating the various transfer functions, and designing PID controllers.
The report presents the results of the simulation of the various flight stages and demonstrates the feasibility of both building and flying the aircraft and meeting the requirements of the mission profile.