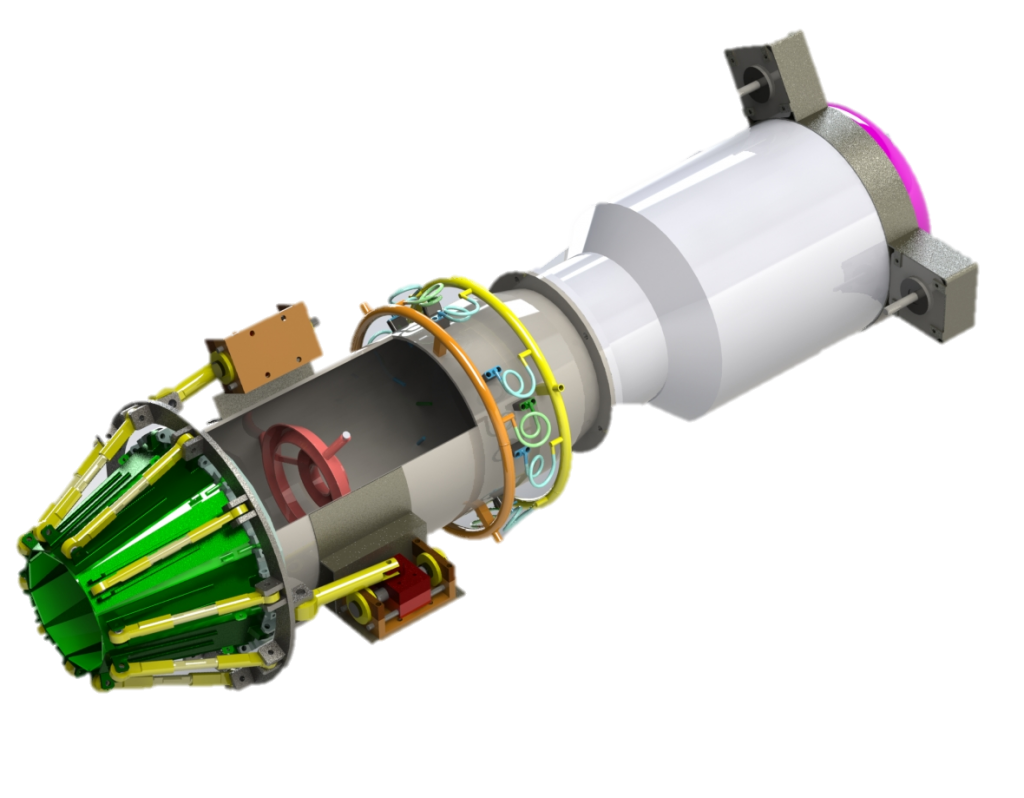 The objective of the Afterburner and Vectoring Nozzle project was to experience the process of designing, building and proofing of both products.

The motivation for creating an afterburner and a vectoring nozzle for a small jet engine is to enhance the performance of a small jet-powered UAV in terms of velocity and maneuverability.

Initially, a study of the engine via the GasTurb program and experiments was conducted, in order to refine the general goals of performance enhancements into numerical values to which the design could be aimed, along with obtaining the air flow properties at the end of the existing engine, with which the afterburner and nozzle are made to operate.

Simultaneously to the engine study, a theoretical study of all the stages along an afterburner was conducted. General principles of operation and equations were compiled so that the design process could begin once the data from the engine was available.

On the nozzle front, various concepts of thrust vectoring were thought of with only the most basic limitations, such as no moving parts in the hot airflow, to allow for creative and unique solutions to be considered.

Using the data from the engine study, the afterburner could be designed in more detail. The flame-holder configuration was chosen, along with the fuel injection array. Evaporation and combustion lengths were calculated to give a total length to the after burner, and thus a conceptual model for the afterburner was made.

The nozzle concepts were compared with each other on several parameters, such as weight and increase of external diameter of the whole engine, narrowing it down to two finalists. Further in-depth study and comparison of both concepts lead to choosing a single concept for further development.

The second half of the project revolved around the detailed design of both the afterburner and the nozzle, taking into consideration parameters such as: materials, heat sensitivity, and “manufacturability”.

Further computer simulations were made for the nozzle to ensure the validity of the concept, before manufacturing it using 3D printing and COT items in order to observe the mechanical operation in a real model.

A simplified model of the afterburner was manufactured as well and was used to examine its performance in the testing facility in the lab. A series of experiments were designed and performed to prove the validity of the injection method chosen, to show combustion stability, and find the temperature increase achievable with the design.

The results that were achieved show the effectiveness of the designs, and give an incentive for further development and optimization of the products in the future.